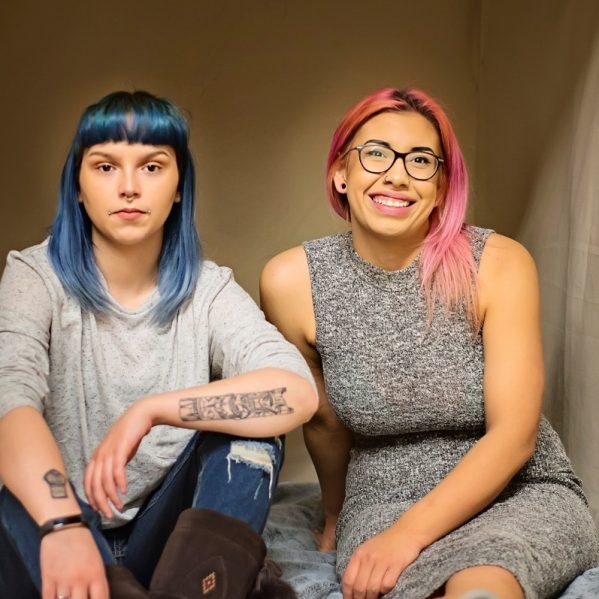 Upon meeting Tristen Wybou and Tess Gagnon, one might get the impression that they were longtime friends with deeply intertwined histories. Like music never skipping a beat, the two rattled off personal anecdotes and artistic visions. In actuality, they were unknown to each other until International Days in March, when Tess attended the Indigenous Drumming & Story-Telling Showcase where Tristen recited her poetry.

Tristen, a psychology major and Indigenous Peer Mentor, is Ts’mshian from Northern BC. The poem spoke of Tristen’s experience as an Indigenous woman and explored stereotypes, colonization, the fetishization of culture and race, as well as systemic and institutional racism.

At the time, Tess, who is Cree from Saskatchewan, had been working on an art installation piece that also served as a safe space. The concept germinated from “a nest under the stairs” that Tess, a fine arts major, would go to if ever she needed to take a reprieve from the outside world.

Impacted by Tristen’s performance, Tess felt a connection to the poetry and to the poet. After an official introduction, they unpacked their separate and collective experiences, which led to a collaboration on Tess’s safe space enclosure, which now includes a soundtrack featuring Tristen’s poem. Tristen’s voice is layered over Round Dance music, which connects the content to an inclusive ceremonial healing practice. “The final result is cleansing. It’s confronting – but comforting,” Tristen said.

Jana Chouinard, Cultural Coordinator, Aboriginal Education noted, “The work speaks to the social othering of not-your-average-Indigenous-persons. Where one visually embodies an Indigenous person, and the other does not, they were able to relate to each other’s experiences.”

“One artist was ridiculed for not having an upbringing of strong cultural ties and is now seeking to discover a heritage that she was deprived of.  The other was raised in an environment that thrived on culture and language as a means of survival, yet experienced extreme racism regarding the perceived Indigenous aesthetic due to a pale complexion. Their collaborative art piece deconstructs the intricacies of their separate but shared experiences.”

The intimacy of the project evokes an intense emotional reaction. “Head Space” invites conversation and education while challenging colonial perspectives.  A blanket covers the entranceway of the safe space, and white fairy lights illuminate the darkness. “The experience is reminiscent of pillow forts of childhood, where we can whisper our darkest secrets,” Tess shared.

This liminal space –characterized by uncertainty and instability– forces participants to sit with their discomfort and be exposed to challenging truths in a contained way.

By combining their strengths and experiences, Tristen and Tess contribute to an unsettling space that allows for listening and reflection. The tension between safe/unsafe materials insists participants confront their contributions to casual racism and micro-aggressions. “Head Space” is a living, breathing entity that ignites empathy and precipitates change where one can explore destigmatization and begin to build their own bridge toward reconciliation and decolonization.

Click the link for more information about Peer Mentorship.

Click the link for more information about Visual Arts.