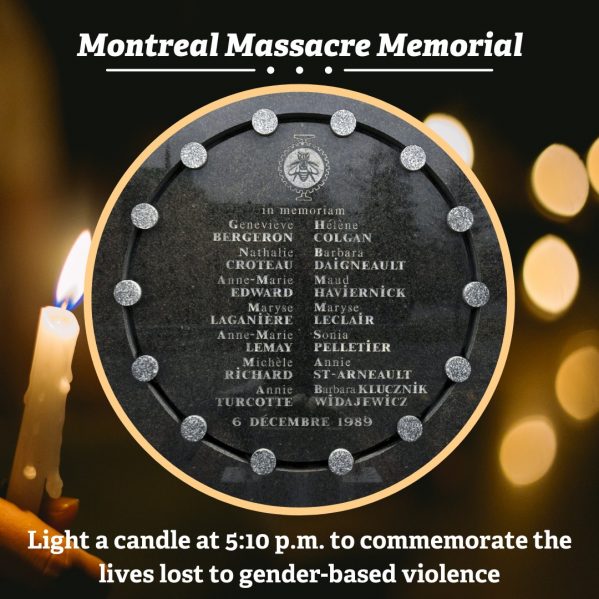 The National Day of Remembrance and Action on Violence against Women is about remembering those who have experienced gender-based violence.

Faculty of Student Development WorkStudy student Irene Vergeychik had not yet been born when the Montreal Massacre happened on Dec 6, 1989. Until her work with Sexualized Violence Prevention and Response, she hadn’t fully processed the magnitude of that tragic event and the subsequent National Day of Remembrance and Action on Violence Against Women, which was established by the Canadian Government in 1991. This day of remembrance, which aligns with the 16 Days of Activism campaign, reaffirms the government’s commitment to combat misogyny, racism, sexism, homophobia and transphobia.

Vergeychik reflects on why this day of remembrance is more critical than ever, and encourages everyone to speak up and stand with survivors of gender-based violence. “I will be committing to furthering my knowledge around supporting victims and survivors.” In preparation for TRUFA Status of Women Committee’s virtual Violence Against Women Memorial on Friday, Dec. 4, Vergeychik spent some time learning about the impact of this devastating chapter in Canadian history.

December 6 marks the anniversary of the Montreal Massacre at École Polytechnique when a lone gunman murdered 14 women and injured 10 other women and four men in 1989. The perpetrator entered the engineering school with the sole purpose of killing women. He separated students by gender and threatened further violence to those who did not comply.

Before the 2020 Nova Scotia attacks, which were also grounded in gender-based violence, the Montreal Massacre was the worst mass shooting in Canada’s history.

As we remember the 14 women who were targeted simply because they were women, we must acknowledge that gender-based violence continues to occur and increase. Due to the recent restrictions, lockdowns and social isolation that the COVID-19 pandemic initiated, support systems might seem inaccessible. Violence might be more hidden during the pandemic, but it is still happening. Together, we can heighten awareness and supports to individuals in need.

For today’s event, organizers invite participants to consider surrounding themselves with sensory items that represent safety and wellness. Supports will be available after the memorial if anyone needs a one-to-one consultation. Sexualized Violence Prevention and Response Manager Sarah Coyle recommends establishing some self-care strategies to bookend the event. “Be sure to check in with how you are feeling. These stories can be hard to consume, even if you don’t have ties to them. Go for a walk, drink some water, or do something that engages your senses, which can help you feel more grounded. Give yourself permission to take a break from media if you need to. And as always, you can reach out to the SVPR office for support.”

Light a candle at 5:10 p.m. on Sunday, Dec. 6, to commemorate the 14 women and other victims and survivors of gender-based violence.

You are not alone. If you need support or know someone who does, please feel free to reach out to any of the resources below: