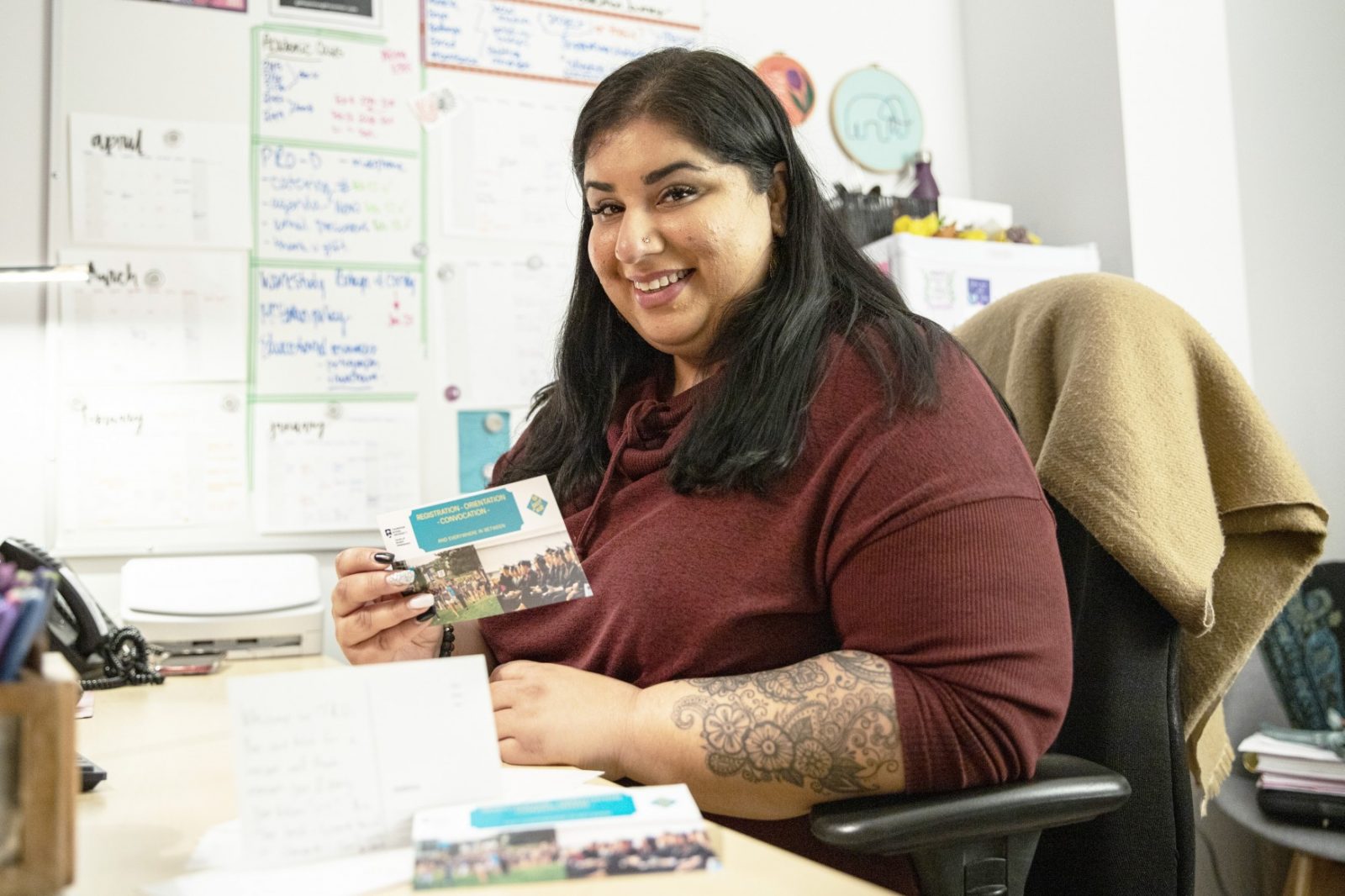 Stephanie Tate wanted to give new students a boost of motivation as they navigate their first year. She found fresh graduates to share their wisdom and insight.

The goal was to make new students feel connected at a time when the pressures of university begin to take a toll. The project to build this feeling of student connection went so well, the student driving TRU’s Words of Wisdom initiative is going to Ottawa to share her success with federal politicians and university officials.

Stephanie Tate, who is taking her Master of Education degree while working as an academic integrity learning strategist, had worked with new students while on co-op with the Faculty of Student Development. She wanted to do something that was simple for them that would let them know they weren’t alone.

Words of Wisdom was born. The project asks students on the cusp of graduation to write short postcards about their journey at TRU. Those postcards are then distributed to new students just as they are writing their first mid-term exams.

Last year, Tate headed out to spring and fall convocation ceremonies armed with a dozen pens, six clipboards and hundreds of postcards in hand. She approached graduates who were gowned up and waiting for their ceremony to begin. Write something simple, something inspiring, something that will help a first-year student get through a tough moment or give some thoughts about your own journey at TRU, she asked.

“Some of the students were so mindful,” she said of the respondents. “What did you want to hear after that first mid-term?”

More than 350 grads shared words of encouragement, hashtags of motivation and ideas to help when studying gets hard. Mostly, they gave a brief reminder that the challenging times will pass with words that would wrap new students in comfort and a sense of community.

“You may feel like you’re drowning, but it’ll be OK.”

“Welcome to TRU. You are here for a reason and that reason only you know ‘it.’ All the best – work hard + smart.”

The postcards were sorted according to the writer’s faculty and circumstances, so that a female plumbing student wrote for another woman starting out in trades and a male nursing student offered advice to a man beginning the program.

Months later, after graduates had moved on and new students arrived on campus and settled into their classes, the postcards went out. Just as those first-year students were digging into mid-term exams, they opened their mailboxes to be told to hang in there.

Tate said she had tremendous support from staff and colleagues as she developed Words of Wisdom. Next week, she’ll be thinking about them (and giving them credit) while presenting her project at the Colleges and Institutes Canada (CICan) annual conference in Ottawa. She joins university and college students from across Canada for CICan on the Hill and Student Showcase at the National Art Centre, where she’ll present a poster about her project’s impact to post-secondary presidents and federal parliamentarians.

To be part of the showcase, Tate was nominated by a faculty member. Projects highlighted at this year’s reception demonstrate social innovation, entrepreneurship, sustainability, reconciliation and inclusion. Showcasing student-led projects demonstrates the important work being done on the ground across the country and reinforces the difference the students and their institutions make in their community.

Tate said she might pick up a few new ideas to bring back.

“I’m excited to see what other universities have done,” she said.