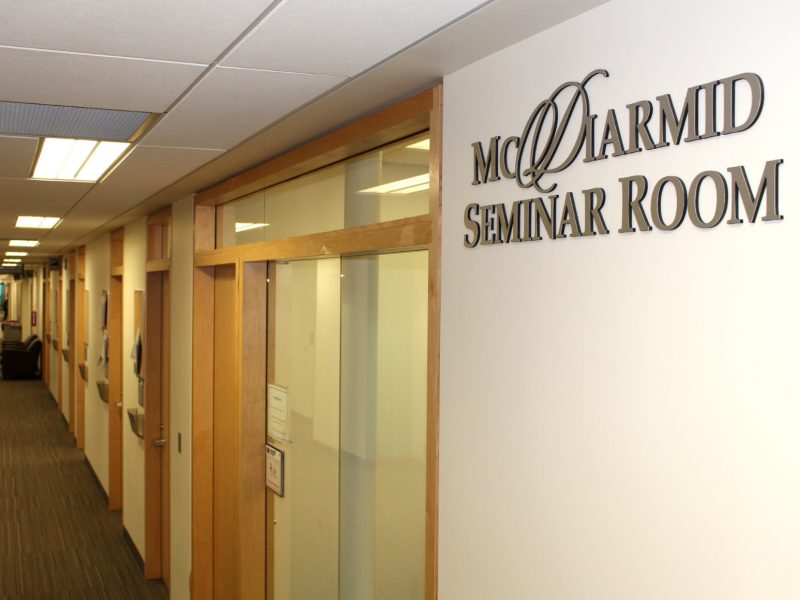 The McDiarmid Seminar Room was named in 2014 in recognition of a $50,000 donation from Rob McDiarmid, Q.C. and Justice Sharon Matthews. They recently donated another $50,000 to fund a new bursary.

Long-time supporters and donors of TRU’s law school Rob McDiarmid, Q.C. and Justice Sharon Matthews have made another contribution of $50,000 to fund a new yearly bursary for law students. The idea arose following the Kamloops Bar Association’s decision to use some of the proceeds from then Supreme Court Master McDiarmid’s retirement dinner to fund a one-time bursary.

Awarded for the first time during the Fall 2021 semester, the McDiarmid Law Bursary is to be given annually to a first-year student in the JD program. The donors hope to support students from smaller communities in the BC Interior—the Yale, Cariboo, Kootenay and Prince Rupert judicial districts—in hopes the smaller communities in those areas can retain more lawyers.

“There are some communities in this province that desperately need lawyers, and you can make a good living there,” says McDiarmid. “There are lots of places that don’t have enough lawyers, and there are some that probably have too many. The intent of the law school was to encourage young lawyers to set down roots in places other than the major cities.”

McDiarmid was among a group of Kamloops lawyers who sought provincial government approval for the JD program at TRU, a program that would be designed to produce practicing lawyers serving smaller, up-country centres.

The university welcomed its first cohort of 75 law students in 2011. TRU’s was the newest Canadian law faculty in more than 33 years.

TRU Law is celebrating its 10th anniversary, and the donors believe it has stayed true to its mandate. A donation of $50,000 in 2014 from Rob McDiarmid, Q.C. and Justice Sharon Matthews was one of the first personal donations to the law school.

They feel that students who reside or study in smaller cities are more likely to settle down in one.

“The vast majority of articling students in Kamloops are from TRU and a lot of them stay,” says McDiarmid. “The experience before was that you’d hire students and you had about a 50 percent retention rate. You’d see a substantial number leave. We’ve been able to turn that around a bit.”

With their latest gift, the donors aim to continue that pattern and help students get a leg up on high tuition fees. Their gift of $50,000 in 2014 was one of the first personal donations to the law school. In recognition of their contributions, the McDiarmid Seminar Room was named on the third floor at TRU Law. Their total donations to TRU Law now exceed $105,000.

“We are honoured to have the continued support of Mr. McDiarmid and Justice Matthews,” said TRU Dean of Law Daleen Millard. “Their input, advocacy and support over the years has been influential in building the identity of TRU Law. This donation is yet another way they are supporting law students and their future careers.”

Matthews was a founding partner of Camp Fiorante Matthews Mogerman LLP in Vancouver. She served as president of the Canadian Bar Association BC branch in 2011, and in that capacity spoke at the law school’s opening ceremonies. Justice Matthews was elected a Law Society bencher in 2014 and was appointed Queen’s Counsel in 2012. She was appointed as a justice of the Supreme Court of British Columbia in 2018 and continues to sit as a trial judge on that court.