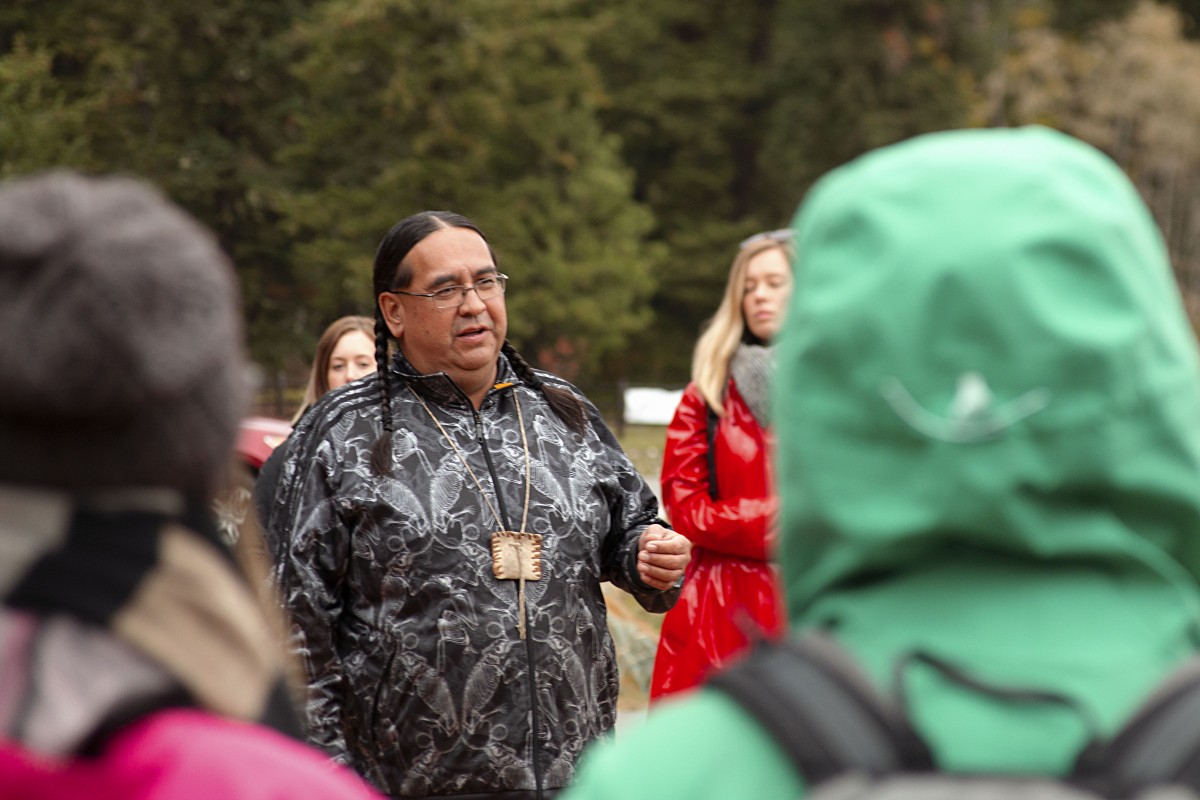 Greg Witzky from the Fraser River Aboriginal Fisheries Secretariat talks to TRU Law students about the importance of the Adams River salmon run to Indigenous people in the region.

Bears will grab spawning salmon from the shallow Adams River waters and pull them up to shore. The bones and bits of flesh they leave behind provide rich fertilizer for the cedars and other Interior rainforest trees and shrubs along the trails of Tsútswecw Provincial Park.

Dominant salmon-run years (that occur every four years) will show on the rings on those trees because of the variation in the nutrient supply, said TRU associate law professor Nicole Schabus, who shared that learning from Indigenous elders while she walked with about a dozen third-year law students along a park trail.

They were part of a full class of 110 third-year law students who travelled to the park on Oct. 2 to see first-hand the vivid red sockeye in their spawning grounds. On this cold fall day, the sockeye were just starting to arrive in the massive numbers they are famous for. There were a few meandering in the water, along with some grey spring (Chinook) salmon who also come to this area to lay their eggs. Students spent the morning learning from Indigenous leaders and knowledge keepers about the importance of the fish to their economy and their culture. They also heard about legal cases involving Indigenous rights, such as the Desautel case. They then went to the park for the afternoon to see the treasured salmon that draw thousands of viewers every year.

Michael Marchand of the Confederated Tribes of the Colville Reservation in north-central Washington told the students about the Richard Desautel hunting lawsuit. Desautel, a Sinixt descendent and Colville tribe member, was charged in 2010 with hunting an elk as a non-resident without a license near Castlegar, B.C. But the land was within Sinixt traditional territory and the judge ruled he had the aboriginal right to hunt within his traditional territory, even though it was in Canada.

Marchand has seen the impacts on salmon and other fisheries from damming of the Columbia River and he offered advice as well as words of warning to the students and local Indigenous representatives. The issues are similar on both sides of the border, he said.

“For my people, it (the salmon fishery) is very integral to the culture,” he said. After the Second World War, the fishery was wiped out and it has taken decades to build it back up.

Schabus organized the field trip as the law school’s third field trip established in response to the Truth and Reconciliation Commission’s calls to action for indigenization of post-secondary curriculum. The other two trips involve visits to the Tk’emlups te Secwepemc administration building, which was a residential school, and to Pipsell Lake, a traditional Indigenous location that was threatened by a proposed mine. A spring salmon waits in the shallows of the Adams River.

“This takes the teachings about the TRC calls to action deeper,” she said. This class is the first to have experienced all three field trips, giving these future lawyers first-hand insights into the colonial underpinnings of Canadian law, land-based issues and an international perspective.

Greg Witzky, operations manager for the Fraser river Aboriginal Fisheries Secretariat and Adams Lake band member, told students there are two mindsets toward the salmon. One is to look at it long-term and ensure that the fishery is sustainable into the future, the second is to get as much out of it now as possible.

Witzky said the short-sighted approach is driven by people just wanting to get richer without thinking about the consequences.

“Today is an experiential lesson in what we’ve learned previously, which is the importance of the land for the Secwepemc people,” he said. As a mature student, his past work experience showed him how much companies and people are driven by money above all. That is one of the reasons behind his interest in going into corporate criminal law.

Another student, Shaun Maddex, was glad to hear about how valuable the salmon are to local Indigenous peoples and how there are numerous factors involved in the fishery’s decline. It’s information and perspectives that future lawyers should be aware of, and will likely determine the career courses of some of them, he said.

Ian McParland has plans to become a criminal defence lawyer, which he realizes means he will likely be representing Indigenous clients, especially given the disproportionate number of First Nations people caught up in the justice system.

Hearing from the people who have historically relied on the salmon run gave it a new perspective for him.