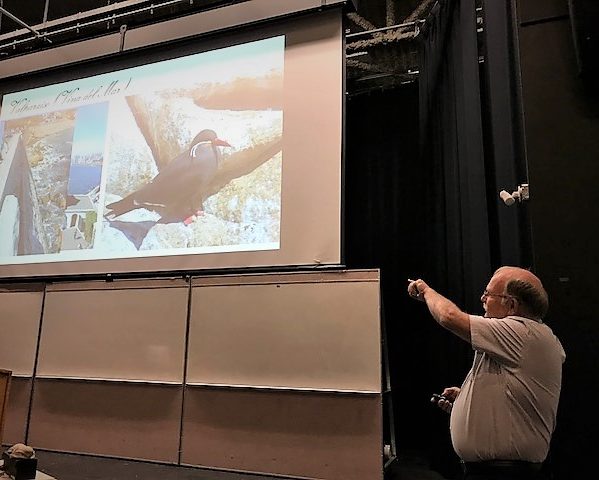 TRU Dean of Science Tom Dickinson points to a bird photo while recounting his trip retracing Darwin's journey on the HMS Beagle.

To say that TRU Dean of Science Tom Dickinson is a fan of Charles Darwin is like saying the world is a little bit round. Complete understatement.

So when Dickinson saw an ad for a cruise that would follow the route that Darwin took on the HMS Beagle in 1831, nothing was going to keep him from being on that ship. Where Darwin travelled in five years, Dickinson would cover in about two weeks, from Buenos Aires to the Falkland Islands, around Cape Horn at the southernmost tip of South America and up to Punta Arena and Valparaiso.

On Thursday, he shared photographs, memories and anecdotes of this trip of a lifetime with an audience in the Alumni Theatre.

Armed with a copy of Darwin’s journal he bought in 1980 and a rare, Spanish-English bird guide, the avid ornithologist gave some background about Darwin and the HMS Beagle. The voyage was a mapping trip commissioned by Queen Victoria to find other routes to spice countries. While others on the ship were surveying, Darwin studied the flora, fauna and geology, gathering the information that would become integral to his theories about evolution and natural selection.

A king penguin checks his egg as TRU’s Tom Dickinson snaps at photo while touring through the Falkland Islands.

In preparation for his own trip, Dickinson contacted the Buenos Aires Bird Club.

“I got to hang out with people who are as keen about birds as I am.”

They took him to several nature reserves where he identified and snapped photos of dozens of species, many he hadn’t seen before.

As the ship moved through the sea water, birds would follow and feast on the plankton and small fish that the wake would churn up. Often, Dickinson noted, one species of bird would show up first, but others would soon follow.

At the Patagonian Steppe, where Darwin had collected extinct mammals, he saw Magellanic penguins and their burrows. Vigilant parent penguins were protecting their young from the petrels that fly overhead waiting for a chance to swoop in on a lone baby. Loco barnacle shells, like the ones studied by Charles Darwin, brought from the Chilean fjords to Kamloops by TRU Dean of Science Tom Dickinson.

At the Falkland Islands, gentoo and king penguins were remarkably tame and their young were at varying stages of maturity, from eggs to moulting young adults.

After navigating around Cape Horn, the ship arrived at the Beagle Channel, near Tierra del Fuego and Mount Darwin. Dickinson snapped photos of the Avenue of Glaciers, a series of massive glaciers named after European countries and noted that they have melted considerably even in the last 40 or 50 years.

One other step Dickinson had taken in preparing for his trip was to get a permit to bring back two barnacle shells. His reason ties back to Darwin.

“He was told no one would believe him unless he was an expert,” he said. So Darwin studied barnacles.

With the help of a knowledgeable tour guide, Dickinson was able to get two loco barnacles from a fishmonger in Puerta Varas near the end of his journey. A little tie to Darwin he could bring back to Kamloops and to TRU. Until the next time. And Dickinson is sure there will be a next time. Tom Dickinson on dry land during his tour retracing Darwin’s journey on the HMS Beagle around the southern tip of South America. 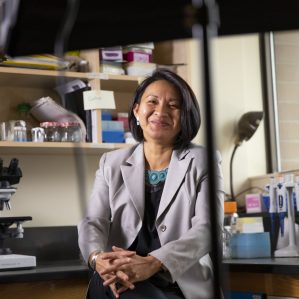 The battle for the bats

Path to poetry a winding one