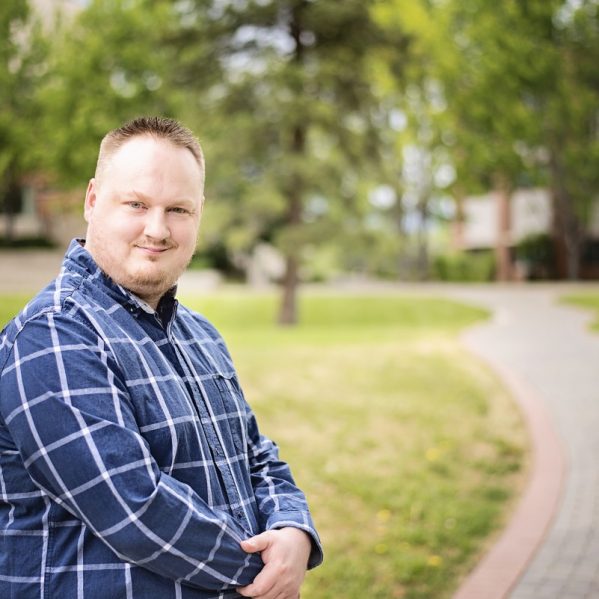 Justin Bourke welcomes the opportunity to champion other students with visible and invisible disabilities. "I want to use my life experience to improve the lives of others.”

On the eve of his convocation ceremony, Justin Bourke reflected on his educational journey and the services that assisted him along the way. During his first two years of university, Justin struggled with math, language and formal reasoning. The sociology and political science major said, “I’m easily distracted and had trouble focusing. The world can be such a noisy place.”

Raised by his adoptive parents, he met his birth family during his university years, which further heightened his stress levels. After grappling with low marks and morale, he discovered Disability Services (DS), and the rest was history. He met with an advisor, who arranged an appointment with a psychiatrist. Following an attention deficit disorder diagnosis, Justin was able to apply for funding to bolster his academic support system so he could move forward with his studies.

“I feared that there would be a stigma, but at the same time, I had more access to solutions once I had a diagnosis and a plan. Knowing that I had support was encouraging.”

As part of his personal wellness strategy, Justin credited the Counseling Department as a positive resource, “I spent some time with Cliff Robinson. I felt welcomed every time I went into the Student Services office.”

He worked closely with DS Learning Strategist Evelyne Penny. “She offered constructive feedback and focused on my creative strengths, which impacted my confidence in a positive way.”

Evelyne remarked, “Justin is so bright and has such a great sense of humor. He made presentations fun and approached projects in unique and interesting ways.”

Beyond his course load, Justin worked full-time as a care aid and balanced a schedule packed with extracurricular activities.  He was president of the TRU Eco Club, and he volunteers with Big Brothers & Big Sisters of Kamloops. Justin strives to encourage and inspire his little brother. He recently gave him a TRU campus tour, which was an exciting day for both big and little.

As a longtime member of the Kappa Sigma (ΚΣ) Fraternity, Justin helped organize the Trick or Eat Drive, as well as Pets for Vets, which helps match companion animals for veterans affected by PTSD.

He credits the brotherhood as an academic support system: Kappa Sigma booked study rooms and one member tutored Justin in statistics.

Justin has combated every challenge thrown in his direction with optimism, resilience, commitment and diligence. “I didn’t want to use my disability as a crutch.  I wanted to earn distinctions on my own merits. I’ve been reluctant to reveal my disabilities at times, but I want others to be inspired. “‘No’ is not an acceptable answer. Yes, you can—you CAN…believe that.”

His future geared towards helping others, Justin welcomes the opportunity to champion for students with visible and invisible disabilities. “I want to use my life experiences to improve the lives of others.”

In regards to future generations, Justin wants TRUSU to implement a representative for students with visible and invisible disabilities. “There is still a stigma, whether it’s staring, discrimination or negative uses of language. More advocacy and education is necessary.”

As he prepares for the next phase of his life–as a Youth Employment Advisor with the YMCA—he acknowledges the magnitude of his successes. “I often think about Stephen Hawking, who has physical limitations but an incredible mind. If he can explore the cosmos, there’s no reason I couldn’t graduate university,” Justin chuckled.

Justin smiled, “I thought it was cool that DS considered me a ‘success story’—but this is just one chapter. There is so much more to come.”

For more information about Disability Services, please refer to the website.