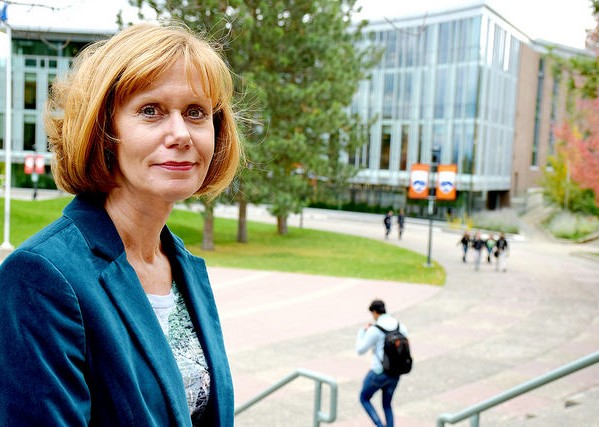 While some cities wish to prohibit or limit the clustering of payday loan operations, Thompson Rivers University economist Dr. Laura Lamb wants more attention given to the lack of financial options for the clients.

When Lamb conducted her research into the use of these fringe finance institutions in 2012, she expected to find evidence to support her gut feeling: payday loan companies were predatory and needed to be shut down.

Reflecting on the survey results of 105 Kamloops residents, she had a change of heart: “If these places were shut down, the people using them would have nowhere to go,” she said.

A full 78 per cent of those who frequent fringe finance businesses have a household income of less than $20,000, and most are using these services to pay for their basic needs: food, bills and rent.

Lamb, with help from two undergraduate students, completed the research with support from the Thompson Nicola Cariboo United Way and the Kamloops Homelessness Action Plan. Since then, she’s been digging deeper into the data she collected, and in October published “Aboriginal Fringe Finance Use and Financial Capabilities: Survey Evidence from a Canadian City,” in Economic Papers.

“People don’t use these places because they’re not financially savvy. They use them because they don’t have any other choice,” she said, adding that the continued use of fringe finance makes it difficult to get out of poverty. This type of banking is expensive, and even if you pay off a payday loan, there is no opportunity to build credit or get ahead.

“The people who are using them are just digging themselves deeper into poverty.”

Most of the respondents (76 per cent) already hold accounts at mainstream banks, but aren’t getting the services from those banks that they require.

And what surprised her perhaps the most was how many of those who responded to the survey self-identified as Aboriginal. About 10 per cent of the Kamloops population self-identifies as aboriginal compared to 42 per cent of her survey respondents. Aboriginal respondents were also much younger than average, and scored lower on the financial capability quiz.

As a result of her findings, Lamb suggests there is a need for culturally appropriate and relevant training to address barriers to Aboriginal financial literacy. While she emphasizes that there is a role for government to provide an incentive for mainstream banks to better service their more marginalized customers, specific focus needs to be made to address the needs of the Aboriginal population.