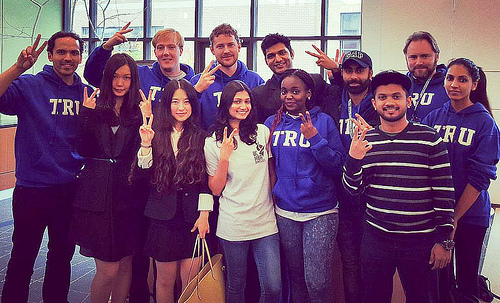 Members of the MBA competition team put in a strong showing at the recent BC MBA case competition.

TRU was one of five universities to compete in Nanaimo. Upon arriving at the event, which was held from Oct. 16–18, TRU’s MBA team discovered they were vastly outnumbered. All the teams from the other four universities, VIU, UBC, SFU and UVIC, had teams of 25 students. TRU, however, only brought a team of 12.

“Other teams had so many students on them that they had tryouts for specific roles. With 25 people, you could have substitutes for your more exhausted teammates. We had no such opportunity, everyone on TRU’s team had a distinct role to play,” said Thomas Lowe, one member of the TRU MBA team.

Despite the odds being against them, team captain Natasha Kurien delivered a speech that showed the other universities at the competition that TRU would take no prisoners. TRU’s team wanted everyone there to know they had come to compete, represent their university and most of all, have fun.

The MBA games themselves were divided into three categories: case, sport and spirit. TRU placed second in both the case and spirit components of the games, and consistently placed third in the sporting events (dodgeball and the dragon boat tug of war).

In the “Pecha Kucha,” teams had to design a presentation supplemented by a slideshow of 20 images, each slide being shown for 20 seconds each. Being a case competition, a company had paid to have the case based around them. That company was Tilt, a crowdfunding company. Teams had to devise presentations that would show the audiences how Tilt could change the world.

“Every other team went morose and made presentations on how they would fix the education system or end world hunger. While great messages, we wanted something more reasonable,” said Kenny Glass, another member of TRU’s MBA team. “We decided to get some humour in there and connect with people on a personal level.”

TRU’s team decided to change the world by crowdfunding Lowe’s brother’s bachelor party. In the end it wouldn’t net them a win, and they marginally lost to VIU. However, they might as well have won by popular vote, because they were the only team to receive funds from the audience for their cause via Tilt.

TRU also did exceptionally well in the overnight case competition, where they analyzed a B.C. business and made recommendations for what they could be doing better. Though the case wasn’t held “overnight,” all of the preparation for the competition was done in the early hours of the morning.

“Our solution to the company’s problem was something they had already developed. So we had to completely reverse direction at 2 a.m.,” Lowe said. “I was up for 41 hours.”

Despite preparing all night, TRU would end up losing to UBC by a split decision.

Though the financial case competition held little results for TRU, the team placed second in the spirit competition, where TRU raised $2,169 for the Canucks Autism Network using Tilt. With a $1,500 contribution from New Gold, $150 from Ooh! KABSA and $250 from Squamish Mills, TRU was able to double the amount raised by the team in third place. In total, all the MBA teams raised $10,000 for autism.

After all was said and done, at the end of the competition, TRU was one ranking away from winning the entire BC MBA games. “VIU’s president came up to us afterwards and complimented us on how the smallest university came the furthest,” Lowe said.

All the members of the team attributed their victory to TRU’s great MBA professors, who connect with their students on an unparalleled level. “The great friendships we had formed within the program, and the tight-knit structure of it really helped us prosper as a team too,” Kurien said.

Although they will be graduating this year and won’t be able to attend next year’s games, Lowe, Glass, Kurien and the rest of the team regard the experience as the highlight of their MBA. Above all, they went to the games with the sole idea of representing TRU and building a culture of competition and teamwork within TRU’s MBA program for years to come.

Their advice for next year’s team: experience.

“Take on as many case competitions and similar events as you can and show the rest of Canada what TRU is made of. Your degree is only what you make of it,” Lowe said.