Clemantine Wamariya speaks to a class at TRU prior to giving her International Days keynote address.

Human rights activist Clemantine Wamariya has gained international attention since her first appearance on the Oprah Winfrey Show in 2006 to share her experiences of the Rwandan genocide and a childhood spent in African refugee camps. Since that first visit, when she and her sister were reunited with their long-lost parents, Wamariya has been a guest on Oprah three more times, has graduated from Yale with a comparative literature degree, and was appointed by US President Barack Obama to the board of the US Holocaust Memorial Museum.

Leading up to her keynote address at TRU, at the opening ceremonies for International Days, the Newsroom asked Wamariya about her fight for human rights and how she inspires others to make a difference.

TRU: Why is it important for youth to get involved with a cause?

I have a problem with the word cause, or issue. When you think of a cause or issue, you remove the personal experience and are removed from the understanding of others in general. Because when you think of causes, you almost think of it as something foreign—it’s not us, it’s just a cause. So I’ve thought about reframing it as challenges that we’re still facing.

And this is why youth should be aware of the issues, the causes, because these are challenges we’re facing in the world today. If we don’t tackle it right now, there are more, and bigger consequences for us to deal with in the future, and it will be financial, mental, and emotional. We need to be aware of what’s going on around us because sooner or later we’re going to have to pay for it with our own money, our own time, or our own lives.

It’s important for youth to get involved in the challenges because we are so free, we have the time, we have so much energy, so much power in us right now to really tackle things that are challenging us. So when we are older and have kids, we can say, “I’m glad I did that because my kids, our kids, won’t have to worry about that challenge anymore”.

TRU: How do you impassion people to get involved?

I share my stories and other people’s stories to bring humanness to the challenge. It’s not just a cause and not just an issue, it’s a mother, a child, a brother. I use my own stories as an introduction for others to understand my position and situation, but also for people to understand there are people in those situations currently.

I use stories to connect voids, to connect emotions so that if someone is going to tackle the challenges, they have a face, a story, an image of what that challenge looks like. You have to name what you’re tackling, so I try to give a face, give a name in order to really awaken people to realize we’re in trouble. We’re losing our brothers, our sisters.

TRU: What made you decide to share your experiences in Rwanda and the refugee camps?

In eighth grade I went to Washington, DC, one of the biggest trips a lot of eighth-graders get a chance to go on to learn about America and the world in one big city. It was a very intense trip. We went to all these places where wars were fought, where the Civil War was fought, places where all the slaves worked and the details, here’s the Vietnam Veterans Memorial. And there was this one evening where there were binders and binders filled with laminated names of people who were lost and had never been found. The following day was spent at war memorials and the Holocaust Memorial Museum.

That night I just cried and cried. I thought I had left my past; I had left a place of war and destruction far away. I had a picture of peace and struggle in the land that I was in. And then learning about Europe, learning about Asia and America itself, I was burnt out. I could not wash it off. I was so traumatized. I asked myself how is it possible that people are still walking around? How can we exist knowing we’ve been so destructive, so hurtful to others? For the rest of the trip I refused to go to any more memorials. I said “No, I’m staying on the bus, I’m not going to see more things because it’s just too painful for me.”

People said, “Oh, it’s because you’ve been through wars, seen so much, lived in refugee camps.” I thought, “What? We should all be freaking out because those people are just like me, they’re just just like you—we’re not that different.” The difference is that I survived all those different wars, different poverties of mind, and lack of kindness.

That’s why I ended up saying I’m not ready to be quiet, to pretend that I live in this beautiful, bubbly world. It’s beautiful, understand, but you have to recognize the injustices going on around you. If I know my skill, which is to fight for what I want, I’m going to use it to invite others to be with me, to understand it with me.

I was 15 or 16 at the time and since then, I have never doubted myself because every year I face more challenges, every year there’s improvement. And just like others are improving technology, improving the roads and education, I want to improve the way we see one another; and telling stories is the way I want to do it.

TRU: What advice can you give to students who have a cause or challenge, but don’t know how to get started?

I can’t tell anyone to do something, I can only encourage. To be able to make impacts starts within, and asking oneself, what is the one thing keeping you awake at night? What is the last thought that sometimes gets in your head? When you have discovered that in you, use it as a tool.

Think about not only doing for yourself, but doing for others. Because when you try solving that thing that makes you angry or keeps you up at night for others, it’s going to be a fuel for those powers. Take those powers you have as a tool to get further and further. Start in your school, ask other people, join people who are already using those powers. As young people, we need to know about our powers, our abilities.

You need to have compassion and be passionate, because those two tools are anchors to loving and respecting others, to being mindful of others. If you want to tackle any of the challenges in the world, it has to start within you and it has to start with compassion and passion. Because some of your tools—having money—you could lose in a second, but having that one thing within you—that compassion—is one thing I’ve never lost.

TRU: Has your activism taken you back to Africa?

I’ve been back to Rwanda several times to serve, to connect and reconnect, to visit families, meet new families. I’ve been back to refugee camps to document the experience and to put myself back where I grew up and realize that life still exists.

I’ve gone to schools in Africa. I’ve gone to speak at the Oprah Winfrey school, to connect with students. How can I guide them through college classes, how can I be a big sister? I’ve worked with companies that are serving the poorest of the poor in Africa.

Most of my summers and spring breaks in college, I spent where I grew up, doing something a little bit different—serving refugees, like “Hey, here a few tools on how to ride it out,” and giving them a little bit of hope.

TRU: How do celebrations of diversity, such as TRU’s International Days, help promote human rights?

Events like this help us to be more mindful. Being together on the same stage, to see others celebrating their cultures and be invited to celebrate with them, it’s not just another dance, the events get us intrigued about one another and the whole experience. The singing, dancing, cooking, the presenting is to show each of us that we’re alive, we’re here, we’re existing. Honour that. Cherish that. Come and join us. It’s a beautiful human invitation. It’s an invitation to be more mindful of others. 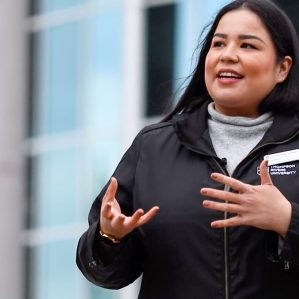 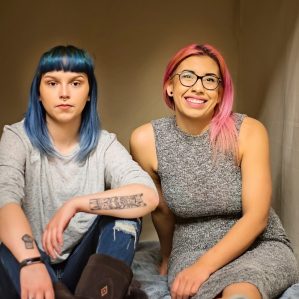 Art, poetry and other acts of self-preservation