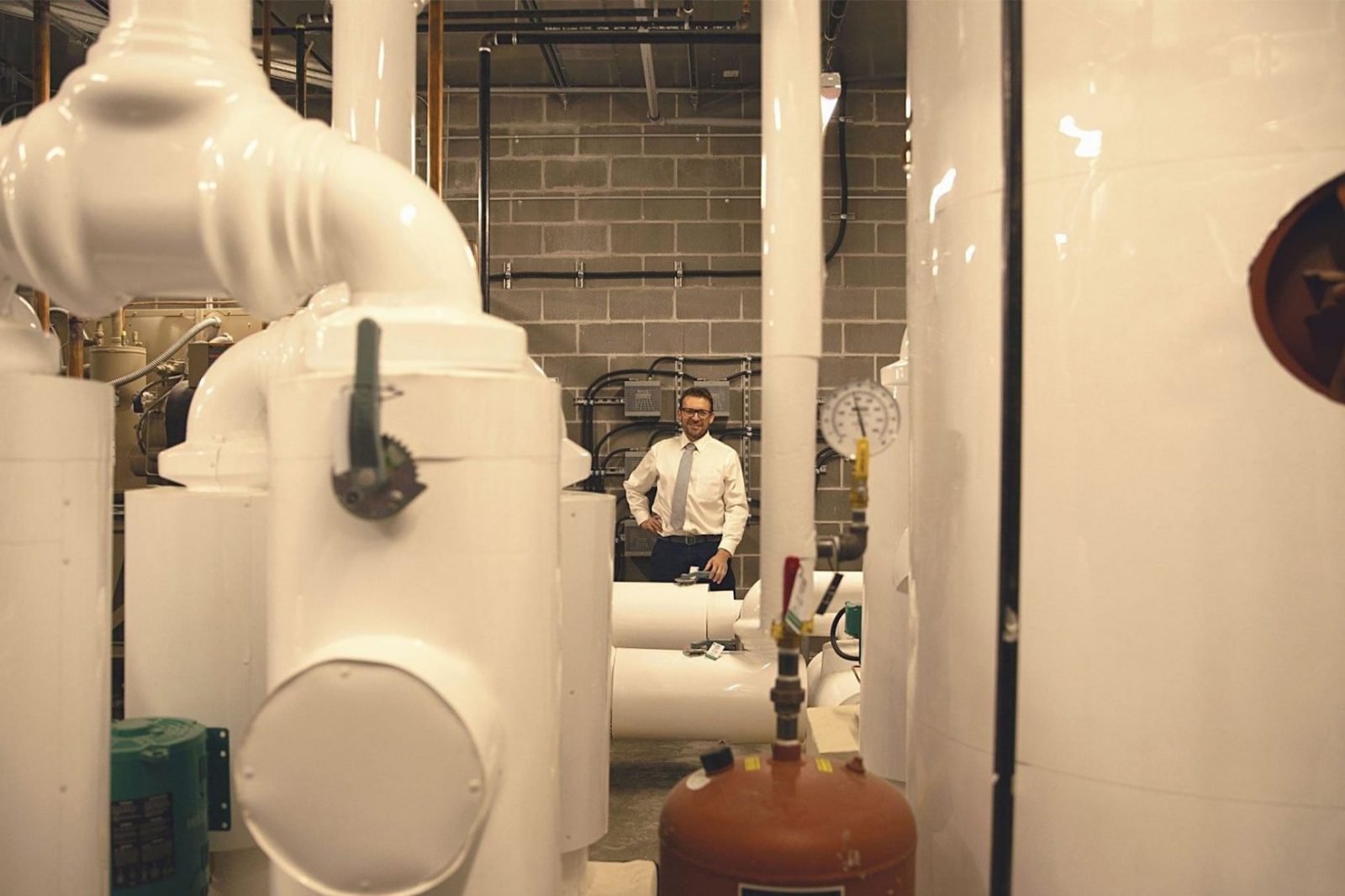 Since this article first appeared, Thompson Rivers University has received more recognition for its sustainability achievements. The Sierra Club named TRU the Coolest School of 2019, the first time a Canadian university has been named as number one. Additionally, the Association for the Advancement of Sustainability in Higher Education (AASHE) named TRU as one of four universities and colleges in the top overall spots in its sustainable campus index.

THE FIRST UNIVERSITY IN CANADA TO EARN PLATINUM WITH THE ASSOCIATION FOR THE ADVANCEMENT OF SUSTAINABILITY IN HIGHER EDUCATION, THOMPSON RIVERS UNIVERSITY BUILDS ON LEADING THE WAY

Thompson Rivers University aimed for the STARS in its sustainability performance and hit platinum.

In late 2018, the university was awarded the highest level possible in the comprehensive scoring system that ranks the sustainability efforts of hundreds of the world’s colleges and universities. STARS stands for the Sustainability Tracking, Assessment and Rating System, a self-reporting measurement overseen by the Association for the Advancement of Sustainability in Higher Education.

“Sustainability is not something that happens off the corner of our desks or by a small group of people. While we have made strategic and consistent investments towards our sustainability goals over the years, it has been our community that has embraced its importance and enthusiastically participated,” said TRU Vice-President of Finance and Administration Matt Milovick.

The platinum status marks a continuous improvement for TRU since the university began participating in 2012 when, as a charter member, it attained silver. The next report in 2015 yielded gold. And in 2018, TRU accumulated 176 out of a possible 200 points—enough to achieve platinum.

By signing up for the STARS program, TRU demonstrates a commitment to sustainability going beyond buzzwords and promises. The university has made sustainability part of its culture. STARS requires that institutions scrutinize their operations in the areas of engagement of students, faculty and staff; day-to-day operations (including sourcing and disposal of supplies and materials); planning; innovation; and more.

“Every department is doing something to contribute to the (platinum) recognition,” said Jim Gudjonson, director of TRU’s Sustainability Office. “This report shows we’re working well together and moving toward something great.”

Every year, more colleges and universities turn to STARS to guide their environmental efforts. TRU incorporated the STARS criteria into its strategic plans involving all four pillars of sustainability: economic, social, cultural and environmental.

Most obvious is recycling. Zero-waste stations that accept multiple items separate and divert more than 600 tonnes of mixed recyclables, organic waste, refundable bottles and plastics from going to the landfill each year. Organic waste is collected, transformed on campus into compost and used by TRU grounds crews.

Blue boxes are present to recycle used paper. Digital documentation is encouraged and used when possible. As a result, paper consumption has dropped to seven million sheets per year from 22 million in 2013.

More than $140,000 a year has been saved in energy and labour by replacing lightbulbs on campus with longer-lasting LEDs. Older campus buildings have also been retrofitted to be more efficient, while students and staff are asked to turn off lights and computers when they aren’t in use.

Efforts to reduce greenhouse gas emissions are also revved up. Hybrid electric cars are available for faculty and staff, free of charge, within a specified distance. TRU has an agreement with a ride-share company for two vehicles to be available for students to rent. The facilities department uses an electric truck and there are plug-in parking stalls for visitors’ electric vehicles.

Faculty and staff who seek fresh air on their daily commute can test drive electric bikes from the Sustainability Office. They can also buy e-bikes at a discount through the university—a nice option on a campus that participates wholeheartedly in Go By Bike Week every year.

Another important part of TRU’s commitment to sustainability are its Williams Lake campus and five regional centres that offer programs closer to where students live. Many of the 1,200 full- and part-time students who study in Williams Lake each semester are older students juggling classes with working or parenting. Staying close to home keeps them near their support systems while reducing travel costs, time and gas emissions.

Williams Lake also has a unique project involving a partnership with School District 27. They heat some of the campus using the district’s Cataline school biomass exchangers. In just one year, the campus saved $40,000 on natural gas.

The Open Learning option is welcomed by students who need flexibility in their learning schedules.

While travel and other emissions are reduced by learning online, the down side is there is more use of electricity and computers.

Online and distance programs reduce the environmental impacts of students’ travel, but there is also a move to save trees by cutting back on printing and making more text books open to all. BCCampus estimates 100,000 students use open textbooks in their courses. Between 2012 and 2018, BC students saved more than $10 million with open online textbooks.

TRU’s biggest book source, the library, has a collection of more than 150,000 ebooks. Even so, it still keeps printed publications; some aren’t available in digital form. But eventually, for various reasons, some books have to go. Collection services librarian Penny Haggarty connected with Better World Books (BWB) several years ago to recycle discarded books.

There’s also a program with other university libraries in Western Canada to co-operatively share low-use books.

Gudjonson said TRU still has room for improvement, such as with water use. At 50 years old, TRU still has some of its original 18-litre toilets and an inefficient irrigation system. Water meters are being installed in all buildings to pinpoint trouble spots.

Even as TRU works to improve its STARS scores, Gudjonson is aware that maintaining what has been done is important, too.

“We’ve got it to a very high standard, but we’ve got to keep it there.”

Situated in one of the sunniest locations in the country, TRU is looking at going solar to generate power. In fact, there are already some solar projects running, such as the solar sidewalk and solar compass. But there’s room to expand.

“We’re looking at 1.1 million square feet of rooftop solar panels. It could generate 2.5 megawatts of power in two to three years. It would help with running air conditioning and other things on campus,” Gudjonson said.

Currently, TRU pays up to $40,000 a month for demand charges. Solar panels would cost $5 million and could shade buildings where they are installed, reducing the draw on air conditioning. Down the road, the university might cover some parking lots with solar panels to generate more electricity.

While TRU has reduced its greenhouse gasses by 33 percent, Gudjonson’s goal is to get them down by 60 to 65 percent. Most emissions come from heating buildings with natural gas. He wants to get rid of natural gas from campus entirely.

That’s why the new Industrial Training and Technology Centre has a non-conventional electric boiler big enough to heat it and the adjoining Trades and Tech building. Biomass is also being explored as an option, with discussions ongoing with UNBC, where biomass emissions are burned, then precipitated to drastically reduce residual gasses. The emissions are reduced to the daily amount to one city bus idling.

Despite the serious concerns espoused by some climate-change scientists, Gudjonson is hopeful for the future. He sees TRU doing its part along with thousands of other institutions making dramatic changes.

“I’ve never been as optimistic as now,” he said.