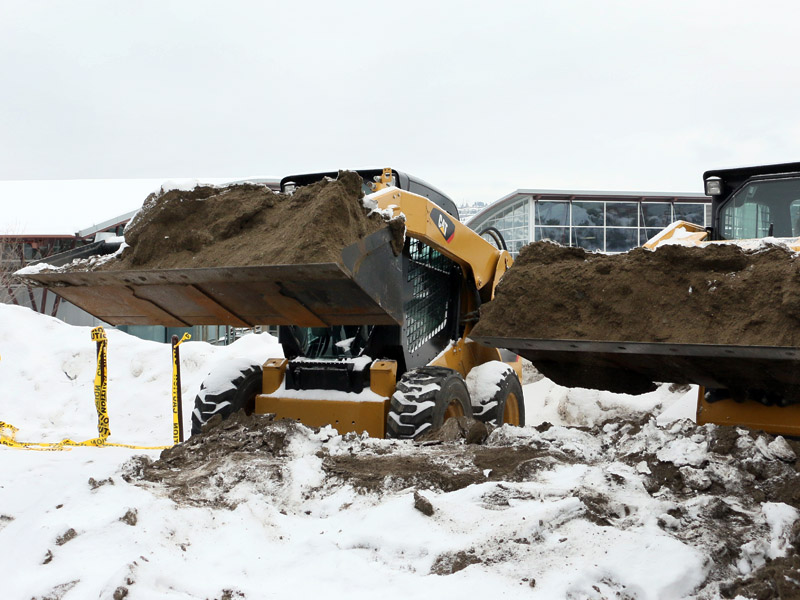 Ground was officially broken today to mark the start of construction for the new $30-million Industrial Training and Technology Centre.

“This new facility will enable Thompson Rivers University to co-locate trades and technology programs, a move that supports our university’s contribution of relevant education and research to various industry sectors in Canada,” said Shaver, adding, “Because we have an excellent working knowledge of the skill sets that local industries and employers need to sustain their businesses, TRU can provide the education for the rewarding careers our students deserve in the trades and technology sectors.”

Construction is well underway at the ITTC building site next to Trades. Keep an eye on the progress with our site camera.

The new 5,344-square-metre centre will allow the university to expand its trades and technology programs by an additional 550 full-time equivalent student spaces (FTEs), for a total of approximately 2,142 FTEs.

The renovated space in the School of Trades and Technology building will be used by the architectural and engineering technology program.

The Government of Canada contributed $13.25 million and the BC Ministry of Advanced Education provided $7.03 million toward the $30-million cost of the project. TRU and donors, including Western Economic Diversification Canada, contributed an additional $9.72 million.

Completion of the ITTC is expected in the spring of 2018 with occupancy in the fall of 2018. Construction of the new centre is expected to generate 108 direct and 82 indirect jobs for the region.

The funding is supported by the Government of Canada through the Post-Secondary Institutions Strategic Investment Fund, which will enhance and modernize facilities on Canadian campuses and improve the environmental sustainability of these facilities.

The total investment in the Province of British Columbia through the Post-Secondary Institutions Strategic Investment Fund is $671 million including:

The BC government is making record investments in modern, safe infrastructure projects throughout the province, and in doing so, these construction projects are creating well-paying,family-supported jobs.