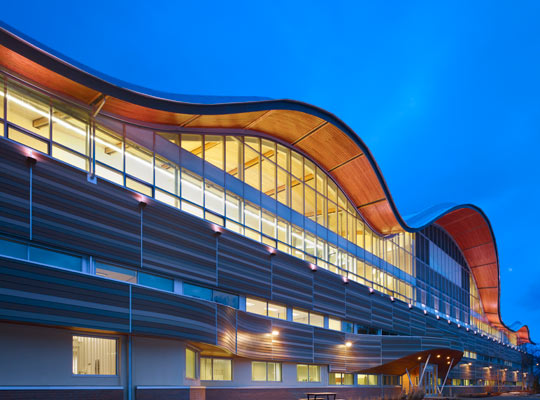 For more than forty years the T-shaped utilitarian structure of Old Main has been the cornerstone of post-secondary education in Kamloops. It’s where WAC Bennett fired up a welding torch, industrially cut a steel beam and declared Cariboo College open.

This month TRU’s Faculty of Law officially opens its space atop Old Main, replete with a law library, law clinic, and moot court in an award-winning renovation best described as inspirational.

Read the full article in the Spring 2014 issue of Bridges Magazine, on campus now.

The splendour of Mt. Peter and Mt. Paul was the muse for the architects at Diamond and Schmitt who created the undulating, curving design. Started in May 2012, the extensive reconstruction of the exterior and the addition of a third and fourth floor make the 1970s structure virtually unrecognizable.

In December, students, faculty and staff moved into the 44,000 square foot addition, which is dedicated to the Faculty of Law and administrative space for the Master of Business Administration program. Featuring light hardwoods, ample natural light, and spectacular views overlooking the city, the re-imagined building received an Honour Award of Excellence for 2014 from the Society of College and University Planning and the American Institute of Architects. “The curve of the ceiling, the lines, beautiful light fixtures and the natural light are very welcoming—not to mention it’s going to be a while before we get used to the view.”

Every touch has been part of constructing an environment that interim Dean of Law Anne Pappas says is as singular and remarkable as the faculty itself.

“This unique setting in the Interior, with the support from the local and provincial bar and judiciary, allows us to offer our students unparalleled opportunities for the study of law.”

The Law Class of 2014 has also benefitted from a close connection to Kamloops. “We have been shown ongoing support by the bar, the bench, and the wider community,” Pappas says. “Our students have benefitted immensely by this, and in return have given back by participating in as many opportunities as possible to contribute to the community and volunteer.”

TRU Law throws open its doors to the community with the official opening of the Old Main space on June 13. Students, faculty and staff will be joined by local, provincial and national lawmakers—including the Premier, provincial ministers, and honorary degree recipients Gordon Campbell and the Honourable Lance Finch—for a two-day celebration that culminates in the conferring of the Juris Doctor degree to the inaugural TRU Law Class of 2014 at Convocation on June 14 in the TCC.

Read the full article in the Spring 2014 issue of Bridges Magazine, on campus now.