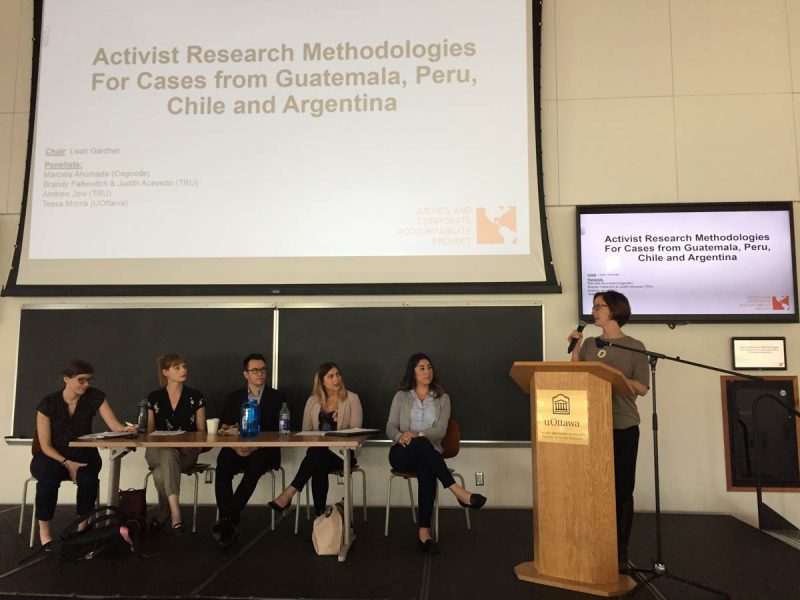 Andrew Jow and Brandy Falkevitch (seated at centre) attend the Justice and Corporate Accountability panel at the 2018 GRITE conference.

The opportunity to conduct research on this issue—one that has generated such international debate—was a key reason that student Brandy Falkevitch chose to attend TRU.

“I was drawn to TRU Law not only because it is close to my family, but also for the opportunity to be involved in the human rights work led by faculty member Charis Kamphuis,” said Falkevitch.

She and her fellow presenter, Andrew Jow, are working with Kamphuis on her leading research that addresses the absence of effective regulation of mining operations overseas. The second-year students were invited to the University of Ottawa to present their findings on a panel at the inaugural Critical Perspectives on Resource Extraction Governance Conference on May 7 to 8, convened by the Group de recherché interdisciplinaire sur les territories de l’ extractivism (GRITE), or the Interdisciplinary Research Group on Territories of Extractivism.

The GRITE conference gave the students an interdisciplinary perspective on international extraction activities and the issues associated with these activities, such as problems of governance, regulation and human rights. Falkevitch analyzed a migration ban imposed by the Peruvian government on Jen Moore of Mining Watch Canada, who was assisting Indigenous communities affected by mining operations in the Andes mountains.

Falkevitch’s presentation reported her analysis of a migration ban imposed by the Peruvian government in 2017 against Canadian Jen Moore, who works as the Latin America coordinator for Mining Watch Canada.

While showing a documentary film to Indigenous communities affected by the operations of a Canadian company high in the Peruvian Andes, Moore was accused by Peruvian police of threats against national security, and authorities subsequently banned her from re-entering Peru. With the help of Peruvian human rights groups, she has since filed a lawsuit against the Peruvian government, alleging violations of the Peruvian constitution.

Earlier this year, Falkevitch and Kamphuis co-authored and submitted an amicus curiae brief to the Peruvian court hearing Moore’s case—a brief which provides unique and specialized legal analysis to the court that is outside the legal parties. Notably, the amicus brief built on research support provided by TRU law student Judith Acevedo Paz, who reviewed and systematized numerous Spanish language documents. The brief offers an analysis of Moore’s case based on international human rights law, specifically the American Convention on Human Rights and decisions of the Inter-American Court of Human Rights.

Kamphius said this case will set a precedent for any other non-government worker, journalist or academic who plans to visit Peru and work on mining and human rights-related issues. Success in this case is paramount to ensuring that these individuals are able to visit Peru and exercise their rights to free expression and association, she explained.

Falkevitch and Jow attended the GRITE conference with support from the TRU Law faculty and the Justice and Corporate Accountability Project (JCAP), a not-for-profit organization co-founded by Kamphuis in 2011, which organized the panel. JCAP connects law students with civil society organizations concerned with resource extraction domestically and internationally. Falkevitch received additional support from TRU’s Undergraduate Research Experience Award Program (UREAP). This summer she is developing her research for academic publication.

“It was extremely beneficial to attend the GRITE conference and learn about different research methods just as I began my summer UREAP project,” she said. Falkevitch, left, and Jow, centre right, with two other student panelists in Ottawa.

Jow’s work also garnered significant interest. He presented his research documenting the Canadian Embassy’s responses to a conflict between local Indigenous communities and a Canadian-owned mine in Guatemala. One of the professors in attendance requested Jow present later this summer at a workshop to be convened by the Centre for Indigenous Conservation and Development Alternatives at McGill University in Montreal.