In the 2016/17 academic year, more than 1,800 international students enrolled on campus in both fall and winter semesters, making up 23% of the on-campus student body. By spring, the English as a Second Language (ESL) department in the Faculty of Education and Social Work (EDSW) realized that the intake process—the steps involved in securing, confirming and placing these students into classes—was past due for an overhaul.

EDSW Dean Airini asked ESL faculty member Jack Massalski to examine the intake process and explore efficiencies, not just for ESL but for all departments that work with international students.

“A lot of people were working on their part of a complicated process,” explained Massalski. Departments were managing their steps in the process independently of other departments, so getting everyone in one room was Airini’s starting point.

Massalski began consultations with Academic Advising, International Registration, the Assessment Centre, TRU World, the international student advisors team and ESL. Once he started considering how to make the process more efficient, streamlined and collaborative—less dependent on paper—he realized there was another way to get everybody on the same page.

Then summer arrived—and with it the largest number of international student applications in TRU’s history. The percentage of on-campus international students jumped to 28% for fall 2017, with what Massalski called a tidal wave of 2,337 students, predominantly from India, China and Nigeria.

“That wave was the impetus behind this project,” he said. “It was the opportune time.”

His redesign of the intake process took advantage of another first for the university—OneTRU, the intranet launched by IT Services in 2016 on a SharePoint platform. Although by summer 2017 many departments had yet to adopt it, Massalski saw OneTRU’s file-sharing capabilities as the answer to managing student data, including English Proficiency Test (EPT) scores and ESL course placements.

“Various units need to access this data fairly quickly to make things go smoothly,” he said. “However, it [quick access] wasn’t possible with this volume of applicants.”

The existing process was slow and cumbersome. The Assessment Centre administered the EPTs, then delivered printouts of students’ scores to the ESL department. There, students waited as faculty manually calculated their EPT scores to determine whether ESL course placement was required and if so, at what level. Then students would depart for Academic Advising, where advisors would need the same data to register students in courses.

So Massalski set up an Excel spreadsheet to capture data and built in formulas to automatically calculate how students’ EPT scores correlate to ESL course levels. He then created a OneTRU site and uploaded and shared the spreadsheet so multiple departments could update it whenever they collected new data, and review the information in real time online. Not only are results faster, there are also fewer errors, because Excel does the calculations for them.

“In the past, we had students come in on two different occasions,” added Henderson. “Now, because of this live spreadsheet, they can just come in once… We can see their scores, we can see if they require an interview, and we can just give them their courses at the same time.”

A pilot of Massalski’s new Sharepoint system in the fall 2017 semester greatly reduced the required time to place students in their courses. Not stopping there, he debriefed with the departments and prepared for another influx: international numbers grew again in winter 2018, with 2,597 students—30.4% of the student body—on campus this semester.

Looking broadly at the face-to-face interactions with incoming students at each stage of intake, Massalski next developed a system to more swiftly and easily identify students by using conference-style ID badges that included barcodes. Scanners were placed at various checkpoints throughout the welcome and intake process.

Staff and faculty scanned the badges so that the students’ profiles could be accessed electronically, reducing the potential for human error. Students were given tickets for their EPT tests. To ensure students held onto their badges until they completed registration, ESL set up a prize draw for all badges turned in at the end of the intake process.

With a simple means of identifying test takers, the barcodes further improved the flow of students between various areas on campus. Massalski says other departments have now adopted the scanners, since with a thermal printer barcodes are easy to generate. He sees potential for further development across departments.

“Technology came in at just the right time. We didn’t have these tools just a few years back,” he said.

On top of the immediate improvements for her department, Henderson saw a welcome cultural shift.

“The redesign of the intake process has created opportunities for transparent and open communications across TRU,” she said. “The initial challenge of managing a large intake became an opportunity that created collaborations, and sparked learning from each other. As we continue to cooperate on projects such as this, we are serving students better.” 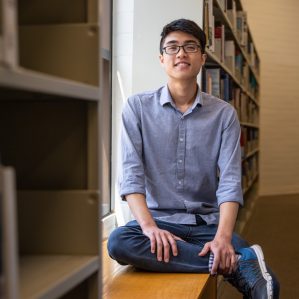 Remember these tips to improve your memory