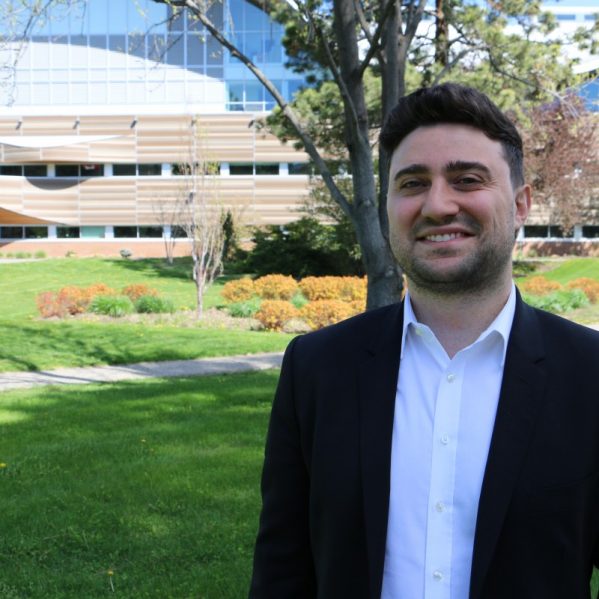 Domenic Cundari didn’t set out to win the 2017 Canadian Bar Association’s Real Property Essay Competition—but that’s exactly what the second-year TRU Law student did after he submitted a paper he wrote last fall for his Indigenous Peoples and Canadian Law course.

His essay, The Conflict Between Aboriginal Title and Private Property in the Secwepemc Territory, takes readers through an overview of two historical conflicts in the Kamloops area, to his examination of a current local conflict involving Aboriginal title and fee simple private property owners.

“I wanted to write about the First Nation claim on the proposed KGHM mine site here in Kamloops,” explained Cundari.

“I started digging and found some information on local historical disputes. I thought I could use those cases to provide some insight into what might happen with the current KGHM case.”

Associate Professor Janna Promislow praises the paper and says Cundari did a great job with the research.

“Domenic took on a highly politicized issue with a well-informed and practical approach,” she said.

“The paper brings several areas of law together, analyzes contentious issues with reason and practicality, is grounded in local concerns of national importance and highlights how Indigenous issues are matters for the Canadian society as a whole,” she added.

“It is amazing to see our students research, learn and grow from the work Secwepemc people have done to gain recognition of Indigenous land rights. They realize it is a real opportunity to study and research in this territory where many of the important Indigenous legal issues at a national scale arise,” lauded Schabus.

Cundari, who was born and raised in Kamloops, says he enjoyed learning about the local history, even though as an undergraduate he was actually a biochemistry major. After graduating from UBC, he was drawn back to the comfort of his hometown in the BC Interior.

“I moved back and got settled. Then TRU got a law school (in 2011). I was never interested in law growing up—despite the fact that my dad is a lawyer (at local firm Cundari & Seibel)—but I was ready for a change and wanted a challenge.”

Having received an ‘A’ on his assignment, he knew he had done well, but only became aware of the CBA essay contest earlier this year.

“The CBA student rep posted it to our Facebook page. I realized my paper fit the topic perfectly.”

He sent his submission to the CBA in February and received word that he was the winner in late April, while he was in the middle of exams.

“I was excited, but I was just trying to keep studying and stay focussed. It’s definitely a confidence booster,” he said, joking that he figures the last time he won anything was a coloring contest back in elementary school.

Cundari’s win and accolades are topped off with a $500 cash prize. His future plans include continuing to explore different kinds of law and eventually working at his father’s firm after graduation.