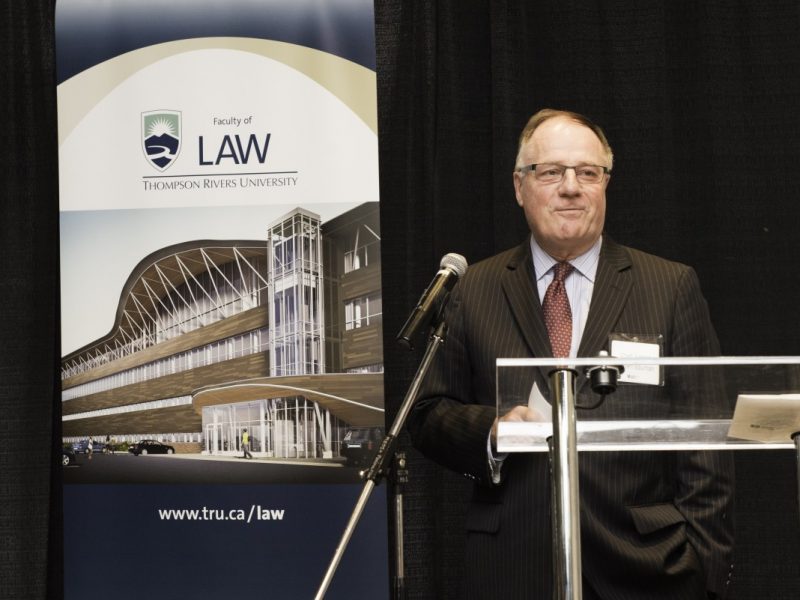 There were smiles, handshakes and applause all around as law students were recognized at the annual TRU Law spring awards ceremony on Thursday. Students received the accolades for achievements in the fall semester.

Third-year student Eli Zbar, who was one of four recipients of the Law Foundation Public Interest Award, says he was thrilled to receive the news that he won the award, saying it put the ‘sweet’ in bittersweet at the end of his law school journey. He says the award represents much more than money. “It serves as a reminder that working in the public interest is a key facet of my professional responsibilities as I start my career,” said Zbar.

After the ceremony, students also had the opportunity to rub shoulders with several distinguished guests including Chief Justice Robert Bauman (Chief Justice of British Columbia and Chief Justice of the Court of Appeal for the Yukon), Madame Justice Daphne Smith of the BC Court of Appeal; Wayne Robertson, QC, Executive Director of the Law Foundation of BC and Judge Terry Shupe (retired from the BC Provincial Court), who were all in attendance to help present some of the awards.

“Our goal over the next five years is to ensure that every Dean’s Prize has a monetary award and that we build our annual award disbursement to $500,000.”

The all-law student acapella singing group, the Lawcapellants, capped off the evening with a performance of a Disney Medley.