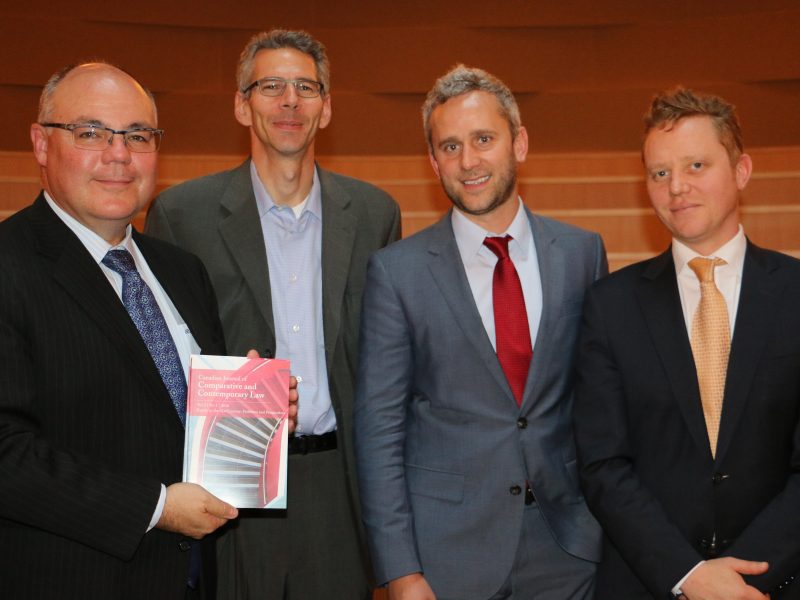 A high-profile judge who wrote the foreword in the recently published second volume of the Canadian Journal of Comparative and Contemporary Law, a legal journal published by TRU Law faculty members and students, says he was very impressed by all of the “heavy hitters” the editors landed.

“It’s legal scholarship of the very highest caliber,” said The Honourable Justice Russell Brown of the Supreme Court of Canada, who is visiting TRU Law this week.

“This collection of authors—they are significant thinkers in the field. I am honoured to have contributed to this journal in my own way,” he said, referring to his foreword.

Justice Brown was presented with the first printed copy—hot off the press—on Tuesday afternoon prior to a public lecture he delivered at the university. He invited applause from the audience in praise of the publication before he addressed the crowd of about 150 eager law students and faculty members.

His lecture titled “Common Law Reasoning from a Recovering Tortaholic” discussed the evolution of common law reasoning—how and why judges make decisions based on the outcome of previous, similar cases. The tongue-in-cheek title refers to his time spent practising, teaching and eventually overseeing tort (civil wrongdoing) cases.

Ultimately, he metaphorically likened a judge’s work to painting.

“A judge is trying to paint the best picture he or she can, with the canvas they have in front of them.” A group of TRU Law students gathers around The Honourable Justice Russell Brown following his public talk in the Barber Center on October 18. Emily Raven (third from left) presented him with a TRU Law sweatshirt on behalf of the Society of Law Students.

Justice Brown was appointed to the Supreme Court of Canada in 2015, and most recently sat on the Alberta Court of Appeal.

Before that, he was a member of the Faculty of Law at the University of Alberta.  As a former law professor, Justice Brown maintains a close relationship with TRU Law’s faculty members.

This marks his second trip to the Law School (the first was while he was with the Alberta Court of Appeal).

When asked about his return to Kamloops and the West (he now resides in Ottawa but is originally from the small BC town of Burns Lake) he says he was a bit nostalgic.

“On the car ride from the airport to the hotel a country song I know came on the radio. It reminded me of Alberta and the West. I feel at home in Kamloops,” he said.

As part of a three-day visit to TRU Law, Justice Brown is also lunching with faculty, meeting students and spending an evening with the Kamloops Bar Association.