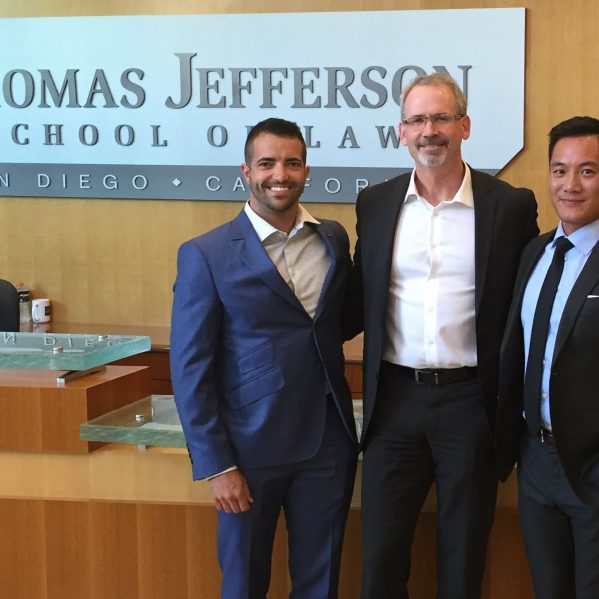 Two law students and their coach represented TRU Law at the National Sports Law Negotiation Competition (NSLNC) in San Diego last week. The event is an oral negotiation competition in a sports context.

Associate Dean of Law Jon Heshka is praising Richard Wong and Nathan MacDermott, who were part of a slate of 40 teams from 23 different law schools competing head-to-head in front of a panel of judges.

“I am extremely proud,” said Heshka. “They were very well prepared and it showed. They went 2-0 in the contest against some stiff competition. The head judge, who is a lawyer and sports agent, remarked that watching their negotiation tactics and poise was just like sitting across the table from the New England Patriots. High praise indeed!”

While the pair performed well, they did not proceed to the finals.

This marks the first time a Canadian team has participated in this competition, which is hosted by the Center for Sports Law and Policy at the Thomas Jefferson School of Law.

The teams were each given three fact patterns for which they had to prepare to negotiate as the legal representatives of their respective clients. The fact patterns dealt with a range of issues including an NFL contract for a previously disciplined player, a modified Olympic games agreement, and an amateur golf sponsorship deal.

The teams were randomly matched and had 45 minutes to attempt to reach an agreement on behalf of their clients. After that time the teams were given time to reflect before discussing their performance and receiving feedback from the experienced panel of judges.