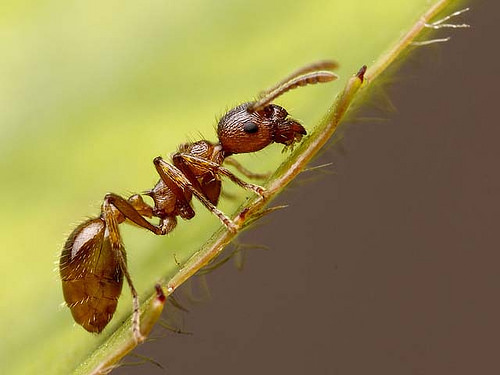 European fire ant expert Robert Higgins and his team of researchers have had some success removing the invasive ant from a section of the VanDusen Botanical Gardens. (Sean McCann photo)

In the seemingly impossible battle to control the spread of the European Fire Ant, Thompson Rivers University researcher Dr. Robert Higgins says he and his team have finally found some success.

Over the past year Higgins and his team have been frustrated at nearly every turn. Even with pesticides, fire ants are difficult to control or eradicate, as their nests are hard to find. Once the nests are found, just putting a shovel into the ground allows the queens to migrate to escape tubes, so if boiling water is poured into the colony the queens emerge unscathed and the colony can recover.

The insects are wreaking havoc at botanical gardens, equestrian centres, along rail lines, at the Port of Metro Vancouver and in numerous backyards. Last year, VanDusen Botanical Gardens in Vancouver was forced to close two areas to the public as a result of the fire ant. Following significant efforts to remove the pest, however, one previously closed area at VanDusen opened up this summer.

“We tried out a lot of different control methods there, and we did find one that worked,” said Higgins.

The first step was to find the nests—a challenge because there is no anthill or any external disturbance. Nests were found by laying out apple slices in grids to attract the ants. The European Fire Ant will only travel a couple of metres for food, so the more ants on the apple slices, the nearer they are to the nests.

Once the general area was pinpointed, they dug up the soil, treated it with a low concentration of the insecticide Permethrin, and put the treated soil back. The treated soil directly kills the ants in the soil and traps queens that have escaped, giving them nowhere to go but back into treated soil.

The method isn’t simple, and it isn’t easy, but it has been the most effective treatment to date.

Listen to a CBC Radio interview

Another option for homeowners, albeit a costly one, is to redo your landscaping.

“If we xeriscape—remove vegetation and put in gravel—the ant doesn’t have a food source,” he said.

While his team continues to develop control methods with support from the BC Inter-Ministry Invasive Species Working Group, Higgins says the fire ant appears to be here for the long term.

“There’s no question they’ve got the upper hand. It’s as if everything we do in an urban environment is good for them.”

This summer’s hot, dry weather only helps the ants mature faster. The mild winter meant the aphid populations are also healthy. Ants, being thermophilic, thrive in high temperatures, so global warming is good news for them.