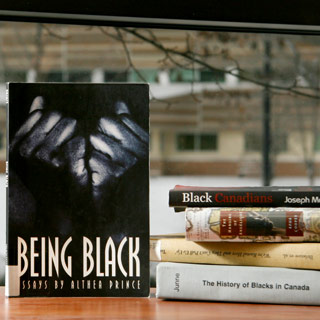 For almost 20 years, Canada has dedicated the month of February to the contributions of black Canadians throughout history. Black History Month originated from “Negro History Week”, developed in 1926 by African-American historian Carter G. Woodson, who chose the second week in February to coincide with the birthdays of President Abraham Lincoln and slavery abolitionist Frederick Douglass. Through the efforts of the Ontario Black History Society, the Canadian government recognized Black History Month in 1995.

Gail Morong is a faculty member at Open Learning and co-chair of the TRU Faculty Association Equity Committee (TRUFA). For the past few years, she has attempted to bring attention to Black History Month at TRU by inviting guest speakers, encouraging related library displays and creating annual quizzes to test faculty knowledge of black Canadian history. Morong’s goal is to encourage other people to take an interest in the history of black Canadians. “I am hoping to see the TRU community become more knowledgeable about a rich history that is not well known.”

“The importance of research into black history is to take a small step in changing attitudes, even if they are just your own,” says fourth-year History student Kristina Franks. Intrigued by a mention in Canadian History class of a black community in Halifax during the Cold War, Franks approached assistant professor Dr. Tina Block to explore the topic further for a presentation at this year’s Philosophy, History, and Politics (PHP) Conference, January 16 to 18. Franks’ research examined the Northern Halifax community of Africville, populated primarily by black immigrants and former U.S. slaves arriving in Canada from the late 1800s to the 1960s. Her presentation, “The Hidden Canadian Problem: Africville, Nova Scotia”, focused on the challenges the community faced in the 1960s, including inadequate fresh water, sewage systems and police services, as well as its demolition and the displacement of its 400 residents.

“It’s important to have a full idea about what happened in Canada”, says Franks, “to learn about and acknowledge the negative treatment of black Canadians. This is not an issue that has completely disappeared.”

To celebrate Black History Month on campus the TRU’s Student’s Union (TRUSU) Pan-African Club have partnered with the TRUFA Equity Committee on Film for Thought on Feb. 27, screening the 1994 nail-biting drama Race to Freedom: The Story of the Underground Railroad that lets viewers experience the hopes and fears of runaway slaves seeking freedom in 1850. This film shows the journey of two men and two women escaping life on a U.S. plantation in search of freedom in Canada. On their journey they discover the Underground Railroad, an intricate system by which whites and freed slaves help runaways reach their freedom in northern free states. “We look forward to attendance by students from all different backgrounds,” says Vince Watson, an International Marketing major and member of the Pan-African Club.

Block wants her students to understand Canada’s diverse past. “Teaching my students about the challenges African-Canadians faced inspires understanding and empathy,” she says, “creating a more complex version of Canada’s past, and awareness of the inequalities glossed over in public history”. She says Black History Month highlights the active role black Canadians played in shaping Canadian identity.

“Knowing that black Canadians fought in World War I, World War II, and the War of 1812, or that British Columbia’s first registered dentist was black creates a more complete picture of Canadian history,” says Morong. “Black History Month is about celebrating accomplishments and educating around black Canadian history. The more we learn of the contributions of blacks to Canada, the better we can challenge misperceptions and stereotypes of this group of citizens.”

Test your knowledge of the contributions of black Canadians with the TRUFA Equity Committee’s Black History Month Quiz.