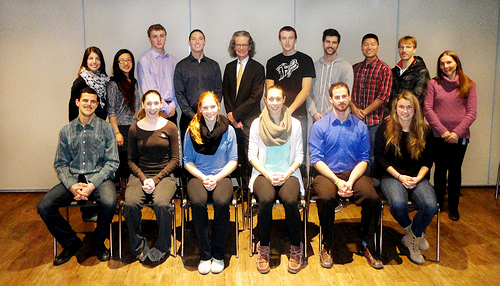 This is about half of the total 35 TRU WolfPack athletes who were recognized for their academic excellence in achieving a minimum 3.6 grade point average during the 2012-13 academic year. The athletes were recognized during a ceremony on Nov. 28, 2013.

It might be three months into the school year, but the Thompson Rivers University WolfPack have taken time out to honour their ‘Academic Best’ for the 2012-13 Scholastic year.

35 student/athletes were honored at a reception held Thursday (Nov 28) afternoon at Accolades at the TRU Culinary Arts Building. Among the dignitaries on hand were TRU President Dr. Alan Shaver and WolfPack Athletics and Recreation Director Ken Olynyk

See below for the list of athletes and their majors

The requirements for being a TRU “Scholar/Athlete” was to have a minimum grade point average of 3.6.

For the second year in a row, the WolfPack cross country and hockey teams had the most students deemed ‘Scholar/Athlete’. The cross country squad, which competes in the Canadian Collegiate Athletic Conference had 10 students recognized.

Hockey had five of its members achieve “Scholar/Athlete” status. They compete in the BC Intercollegiate Hockey League.

Of the 35 athletes honoured there were two: Justin Smeaton of Men’s Soccer (Kamloops, BC) and Kyle Sandulescu of Baseball (Victoria, BC) who achieved the status for the fourth straight time. Smeaton and Sandulescu have both graduated from the Computing Science and History faculties. Smeaton graduated with a G.P.A. of 3.94 while Sandulescu had a grade point average of 3.67.

Nathan Michaels (Kamloops, BC) of men’s hockey, Jorri Duxbury (Salmon Arm, BC) of women’s basketball, and Brett Rouault (Vernon, BC) of Men’s Basketball were deemed “TRU Scholar/Athletes” for a third time. Micheals major was Biology, Duxbury and Rouault are Science majors.

The Athlete with the highest grade point average for 2012-13 was Erika Dufort (Brighton, ON) of TRU badminton. She had a 4.33 in the faculty of science.