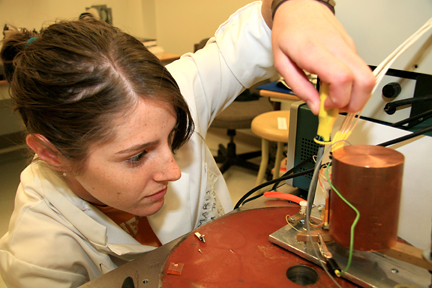 Completing her undergrad physics degree at TRU has proven to be one of the best moves Samantha Lloyd has ever made.

Along the way to receiving her credential this spring, Lloyd has been involved in research projects that many students at larger universities could only dream of.

And the great opportunities continue. Thanks to a research grant, she is being paid for the summer to continue what started out as a Directed Studies project. She has presented research findings at various conferences over the past few months, last summer received a Summer Research Award to mix with leading physicists at TRIUMF (a world-renowned and Vancouver-based laboratory for particle and nuclear physics), and before that spent an eight-month Co-op term with TRIUMF scientists. And all through her time at TRU, Lloyd has been surrounded by equally bright classmates and dedicated instructors who often make themselves available outside of class and office hours.

“I often think of how my education would have been different had I gone to anther university. I don’t think I would be as confident in my abilities and in my ability to adapt and my ability to learn,” says Lloyd, who is from Williams Lake, a city located in the Cariboo region of British Columbia and with a population of about 12,000.

“Bigger universities are so intimidating right off the bat and that can be disheartening. TRU is a nicer environment, more friendly. TRU is a better transition from high school and the rest of the world,” says Lloyd, who begins her graduate studies this Fall in the Medical Physics program at the University of Victoria.

Lloyd’s summer research is a continuation of a joint Directed Studies project with classmate Scott FoubisterTogether, the two built and operated of a device called a scanning tunneling microscope (STM)An STM allows one to view surfaces at the atomic levelThat enables one to determine atom movements as they pass through gapsTRU Physics instructor Mark Paetkau oversaw the project.

“We didn’t do a whole lot of new finding, but what we did was confirm that it could be done,” Lloyd says of the STM she and Foubister created. “Being able to see electron tunneling in action was useful and was a pretty huge dayWe talk about it from second year of university physics and on and you just assume that it is true. When you see it in action, you say, “Wow, this really true and may be useful some day.”

CAREER PLANS
With a wealth of opportunities and career streams in front of her, Lloyd says she’s interested in medical physics because it is closely related to helping heal people. Imaging technology and radiation therapy are the two major streams of medical physics.

“Instead of saying, ‘I’m studying the nucleo-synthesis of distant stars,’ I can say, ‘I’m treating cancer.’ People understand that, and I like that.”

THE SINGING PHYSICIST
When not being Samantha Lloyd the aspiring medical physicist, Lloyd can be found doing something related to music, whether it’s spinning CDs as a DJ with campus community radio station CFBX, playing with other musicians, or singing original songs as Accidentally Ophelia at any of the open mic nights around town. Lloyd’s originals can be heard on MySpace at www.myspace.com/accidentallyophelia.