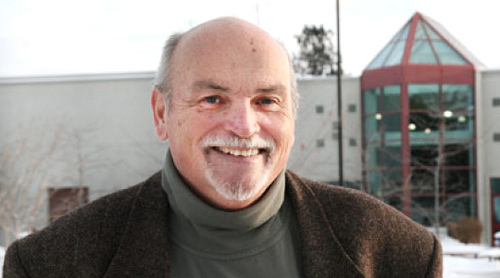 Owen recently passed away after taking early retirement for health reasons from his post as Director, Environment & Sustainability. He had returned home to Winnipeg to spend time with family.

Listen to an interview with TRU Dean of Science, Tom Dickinson as he recounts
the impact Tom Owen had at Thompson Rivers University.

CONTRIBUTE TO THE AWARD
A campaign is underway to build the award to endowment status, which requires a minimum amount of $20,000, and is expected to take upwards of three years to reach that goal. Reaching endowment status will allow the award to be given out on an annual basis. In the meantime, $500 will be awarded.

To contribute, go to Make a Gift and select Specific Scholarship or Award. When prompted, type in Tom Owen Environmental Sustainability Award.

Read the announcement from September 2008
of Owen’s appointment
to Director, Environment & Sustainability.

OPEN LETTER TO TRU COMMUNITY
In an open letter to the TRU community, Peter Tsigaris, Chair of the Environmental Advisory Committee of Senate and the Board of Governors as well as being an Associate Professor in Economics, had this to say about Owen and his time at TRU…

“Tom has played an instrumental role to move TRU towards becoming the University of Choice for Environmental Sustainability. His continuous dedication, leadership, commitment and successful effort over a short time span has made a huge difference.”