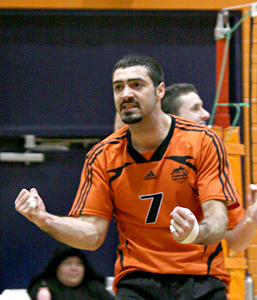 Going to a post secondary institution is designed to change your life. While most of us can say that, very few can genuinely attest to it. Behlul Yavasgel is one of them. Yavasgel has become the first athlete since Thompson Rivers University became a CIS school to go the entire five years and graduate. While that is noteworthy to be sure, it pales somewhat in comparison to what it has meant to the 22-year-old native of Aydin, Turkey.

When Yavasgel arrived in Kamloops five years ago, he knew very little English. “I didn’t even know what program I was going to take,” he said recently. “But I know that I worked hard in every class and feel proud of what I accomplished.”

Yavasgel says it doesn’t seem like five years (he arrived in Kamloops in 2005). He remembers his first day. “I didn’t know any English. I arrived at the airport and ran into Pat (Hennelly, WolfPack Men’s Head Volleyball Coach). We just looked at each other. I could only say ‘Coach’. Then I went to my dorm room and had no bedding. I was so cold. I woke up and tried to find the gym.” he laughed.

“I went to my dorm room and had no bedding. I was so cold. I woke up and tried to find the gym.” – Yavasgel, on his first day in Kamloops

Hennelly also remembers his first meeting with Behlul, who was recruited by Athletic Director Ken Olynyk after Yavasgel approached the TRU World Program. “All I remember is he could barely say coach,” he says. “He didn’t even have hello down. For me, I thought it would be a daunting task to take someone who didn’t even speak the language and try and assimilate him into a team.”

Yavasgel remembers back to his first year “I was 18 years old when I first arrived. Our team was young and so was I. I think we have both grown up and changed for the better. I have to thank the guys for taking care of me the first year. With my English being so limited, it was difficult to get around at times. If I felt bad or homesick, they would cheer me up.” He believes that he has come full circle this season as he mentored some of the younger members of the WolfPack. “It’s hard for them to be in the first year,” he says. “Some might not get to play much. But if they keep working hard their chance will come.”

Hennelly adds it has been a very rewarding experience for him as a coach. “It really made me focus on how I communicated. I had to take some extra time with him. Thankfully, his skill level was the best on the team so I didn’t have to work with him as much as the other players on that aspect. His first two years were the most challenging and communication was key.”

The nuances of a growing program were tough for Yavasgel as well. Hennelly remembers back to his second year. “It was probably his toughest” he says. “We brought in a bunch of new players and Behlul thought that these guys would be taking his spot. It was a lot of stress on him and I didn’t realize why he was so edgy. I heard later that he told his mom that he was coming home. She said to him that if the coach didn’t tell you were not on the team, you were not coming home.”

“I’m glad we were able to communicate enough to him that if he stuck it out he would be okay,” Hennelly added. “Even if you weren’t starting, we wouldn’t get rid of you. To see Behlul go through that and to see where he is now as a team leader, socially he is great with the guys and is now educated. ”

But why TRU? “It was the only school that I had applied to,” said Yavasgel “I looked on line at other schools. But when I found out about what they had to offer here and how nice Kamloops was, I knew that this was the school for me.”

Hennelly says Yavasgel has always been a target for opposing fans. “He is tough as nails, he says. “Every fan goes after him. When we played in the playoffs at Trinity last year, the fans focused all their attention on him: heckling and calling him names. The same thing happened two years ago in Brandon. They called him “Desperado” since he looks like Antonio Banderas. The fans go after him hard but, he is a guy who has never cracked in our program. Behlul is a clutch performer. That is what I’ll remember most from him as a player.”

Such was the case when the WolfPack made their first appearance at the 2008 CIS Nationals, in Laval. “Behlul was not the focal point in offense, so we had a plan to set Behlul late in every set and at the end of matches,” recounts Hennelly. “The opposition thought we were setting Korsbak, or Schoebel or Gord (Perrin). Behlul was open and put the ball down every time. He was 10 for 12 on swings after 20 points. He was steady for us at that Nationals and really stepped up for the program. As he looks back at his five years, what has been the highlight for Behlul? “I think going to Nationals in Laval. Playing before four thousand people was a big thrill. Beating Laval was a good feeling and that’s when I think we grew up as a team. Everything changed for us after that game. But, I hope the biggest thrill will come when we host this year.”

Hennelly has a favourite story involving his player-who became one of the WolfPack’s co-captains this year. “I think it was 16 degrees here in October of his first year, and he was blowing on his hands saying how cold it was while I was still wearing shorts” he laughs. And then there was the first time Yavasgel was gearing up to pay a visit to Regina in the winter. “Before we went there, the guys told him it was going to be freezing. He asked me how cold it was going to be. I told him to take his hand and get it wet and then put it in the freezer for five minutes. Behlul thought I was exaggerating until we arrived and it was minus 35 in Regina. When we got there, he looked around and said “Why people live here?” That again, showed me how far away he had come from.”

Not only did he get a diploma in CSOM (Computer Systems: Operation and Management), but Yavasgel has set himself up for a better life. He hopes to stay in Canada after the school year ends and find a job here. “I don’t want to go back to Turkey just yet,” he says. “I want to get some work experience in Canada first.”

And what does Hennelly think of having the first athlete to go through five years of CIS and graduate. “We probably had the biggest transition of all the teams going from college to CIS,” he says. “Despite our first 1-19 season we have been pretty successful in creating a successful program and maintaining players.”

Hennelly says Behlul’s accomplishment says a lot about the program TRU is offering. “The fact that Behlul, a foreign player, has stayed with the program for five years is a great testament for others who don’t think International players belong in the CIS. I think a lot of people think we parachute these guys in and out. Martin Korsbak (Denmark) was here for three years, (Robin) Schoebel (Monaco) is in the midst of his fourth year. Behlul has shown, that despite all of his obstacles, he has had the most perseverance of any athlete who started in 2005-06 amongst the four CIS Wolfpack teams.”

He adds “I think the transition (from college to CIS) has been hard on the athletes trying to stick with the program. We have all struggled as programs in the CIS. We continue to struggle, but for him to stick with us through the bad and the good times, is truly a great story.”

And what has he meant to the TRU program? “Behlul is going to add to the fabric of our country. He certainly has added to the fabric of our team. Every one of our guys now understands what his life was like and how hard his mother works for so little money in Turkey and how lucky we are in Canada. It’s all part of the University experience, getting perspective on other cultures.”

Hennelly says coaching Yavasgel on the court has been rewarding, but more importantly has his development into an adult. “Behlul is changing the fortunes of his life,” he says. “He didn’t have a bright future in Turkey. You write a government test and if you don’t get a high enough mark, you don’t go to university-ever. The opportunity for him to get a western education…CSOM is a job where he could work anywhere in the world. To learn another language at this point in his life will be very helpful. His life in Turkey, if he would have stayed there would be vastly different from what he will enjoy here.”

But what about the issue of International players taking spots of Canadian athletes in the CIS? “When people complain about seeing these guys here,” says Hennelly. “They forget that Canada was built on immigration. I think everyone can trace back a couple of generations to when their family came over here. My mother is Canadian but her father wasn’t born here—he came over here when he didn’t speak any English. My father immigrated to Canada when he was 20 and raised a family here. We also send Canadian players to play overseas, we have two alumni, Tony Zystra and Andy Haley playing professionally in Denmark and Paul Duerden a member of our Canadian national team makes high six figures playing in Turkey. I think Behlul is a success story on every level. I’m just proud that we were able to support him and get him through this.

The WolfPack will honor Yavasgel on Friday (Feb 12) before their match at home against Trinity Western at 745 pm at the Tournament Capital Center. He will also be recognized at the upcoming Nationals when his mother will come to see him play in Canada for the very first time. It will also be the first time she will travel to this country.